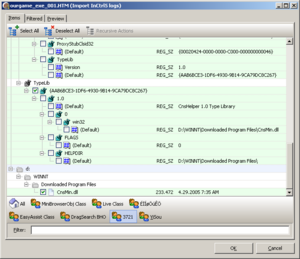 InCtrl5 is a popular tool that monitors changes to the registry and file system and logs them to for example HTML files. OpenSBI Edit Lite is able to import such logs to give you a quick start into writing new SBI files.

The import dialog will give you three tabs:

Not all changes that happen while a malware is installed are associated with that malware. Windows itself does update MRU (Most Recently Used) lists in the registry, for example. Malware might also install legit third party libraries for it's purposes. The InCtrl5 import allows rapid detection prototyping, but you still need to pay a lot of attention to avoid false positives.